Recently, as Indiana has grown to become more bicycle-friendly and as more Hoosier cyclists have started to use their bikes for transportation, there has been an increase in complaints from motor vehicle drivers and pedestrians regarding the behavior and of bicyclists. Such rebel cyclists have come to be known as “rogue cyclists.” News articles and complaints have been appearing in the Indianapolis Star and other news outlets with pleas for local law enforcement to step up its game and issue more tickets for cycling violations. These calls for reform are not without merit; many people who operate bicycles, particularly in the City of Indianapolis and surrounding suburbs, do not understand their duties and responsibilities on public streets in Indiana. The Indiana Bicycle Accident Lawyers at Caress Law Group hope that we can educate readers on this issue and hopefully save a bicycle accident or citation from occurring. 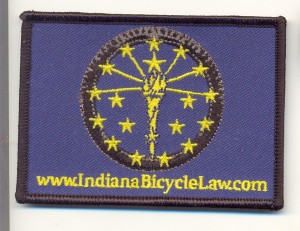 Indiana law provides us with the following statute, “A person riding a bicycle upon a roadway has all the rights and duties under this article that are applicable to a person who drives a vehicle.” Indiana Code 9-21-11-2. While there are a few exceptions that apply, it is important to note that not only do cyclists have the same rights as automobiles, but also the same DUTIES. What does this mean? This means that if you are riding a bicycle on a public thoroughfare, you are required to stop at stop signs, yield where yield signs are present, and stop at red lights. Essentially, all the rules of the road still apply to you even though you are on your bike. If you do not follow the rules of the road in Indiana, you are a rogue cyclist, which makes you subject to traffic violations and tickets from law enforcement officials, who plan to more harshly enforce the law on rogue cyclists this upcoming summer season.

Just recently, the Indiana Court of Appeals touched on rogue cyclists when it issued its opinion in Komyatti v. the City of Indianapolis. In this case, Paul Komyatti was operating his bicycle and was intoxicated while riding on the wrong side of the street when he hit a pothole, causing him to be thrown from his bike and sustain serious injuries. Komyatti argued that the City of Indianapolis and Citizens Energy were at fault because it was their duty to repair such potholes. The Court found that the cyclist did not have a valid claim against the City of Indianapolis and Citizens Energy because his actions (as a rogue cyclist) caused the bicycle crash and resulting injuries – not the pothole.

The Indiana Bicycle Lawyers at Caress Law Group promote bicycling in Indiana; however, cyclists must follow the rules of the road to remain safe. If you are a rogue cyclist and get in a bicycle accident that may not have been your fault, there is still a chance that a jury would find you to be comparatively negligent or at fault, decreasing the resources available to you to cover your resulting medical bills, lost wages, and any pain and suffering you go through. For this reason, we advise all Indiana bicyclists to remain as safe as possible on the road while also enjoying all the cycling opportunities our community has to offer.

Caress Law Group’s bicycle accidents lawyers in Indianapolis take great pride in representing Indiana bicyclists who have been injured in a bicycle accident or collision. Our goal is always to get you or a loved one back on your feet and out biking again. A major part of our service to the community comes in the form of advocating for bicycle rules and programs that will benefit cyclists while also keeping our community safe. Feel free to call us if we can be of any help at 317-255-5400 or e-mail us at lance@caresslaw.com. All consultations are free and confidential. Ride safe!