The Indiana Bicycle Accident Lawyers are excited to pass on the news of a pedestrian/bicycle bridge preparing to open in Jeffersonville, Indiana. The Big Four Bridge is a railroad truss bridge that was completed in 1895 and currently crosses the Ohio River, connecting Jeffersonville with Louisville, Kentucky. Although the Big Four Bridge was abandoned for many years, it will soon be booming with pedestrian and bike-friendly traffic. The bridge is almost complete, and it is scheduled to consist of bicycle and pedestrian paths extending all the way across the bridge with newly built ramps at the each end of the bridge, connecting cyclists and pedestrians with the cities of Jeffersonville and Louisville.

The Opening of New Bike Lanes

The Indiana Bike Attorneys applaud the efforts of Jeffersonville, Indiana in deciding to allocate its resources for recreational purposes like biking, running, and walking. Living in central Indiana, we have the opportunity to use a number of different trails and paths that the City of Indianapolis and surrounding suburbs have done a magnificent job of creating in the last few years. The results has been a city bursting with proud citizens who utilize the city’s resources to travel, exercise, and enjoy what Indianapolis has to offer. We salute Indiana cities for taking advantage of old railroad paths, like the 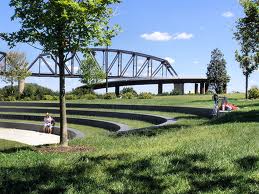 , and turning them into modes of transportation, recreation, and enjoyment. We truly believe that the more strides Indiana takes in this direction, the better the standard of living will be in Indiana, and the more Hoosiers will “share the road.”

As mentioned in some of our previous posts, the landscape of southern Indiana is breathtaking. The Indiana bicycle lawyers plan to take our bikes down to Jeffersonville upon completion of these new trails, and, once we do, we will provide readers with a review of these new paths. Please feel free to request a Bicycle State of Indiana Flag or Patch from us for your next ride, and we will send it to you free of charge. Our goal is for Hoosier cyclists to remain united and proud of the strides our state has taken in making our cities more bicycle friendly. Feel free to contact us or call us at 317-255-5400 with any questions.